Limnos is a beautiful Greek island in the northern part of the Aegean Sea.

With my family, we love going to this island for our summer vacation, because we combine both relaxing on the beaches, eating delicious Greek food and practicing sports – windsurfing and kitesurfing. That is why we are spending our summer vacations for the past 6-7 years in Limnos.
You can go to the island by plan, during summer there are daily flight from Athens, or by ferryboat. We took the ferry from Kavala and it took us around 3,5 hours to arrive to Limnos. 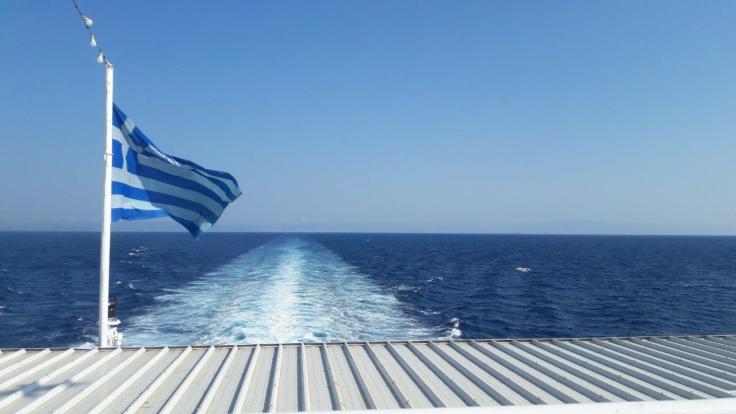 The ferry near the island of Thassos, which is 30 minutes away from Kavala and is highly visited for its beaches. 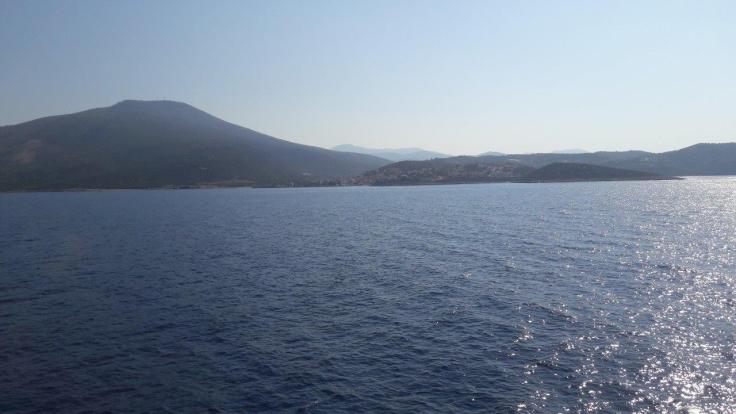 The weather on the ferry was windy and there were big waves breaking to the ferry. We believed that this was a good prediction to have some windy weather for windsurfing. 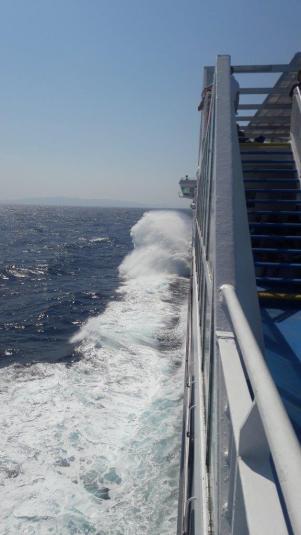 After a bit more than three and a half hours of sailing we saw Myrina, the port city of Limnos and its capital.

Myrina is a small, seaside town, with a nice beach and places where you can spend a day if you miss the city life. 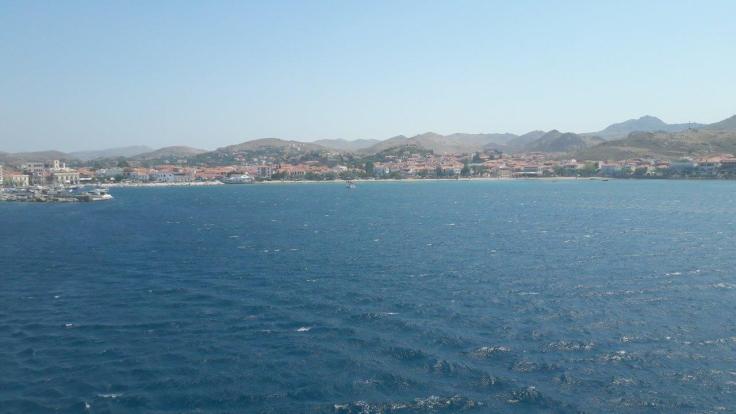 As the port of Myrina is quite small the ferry looks enormous. 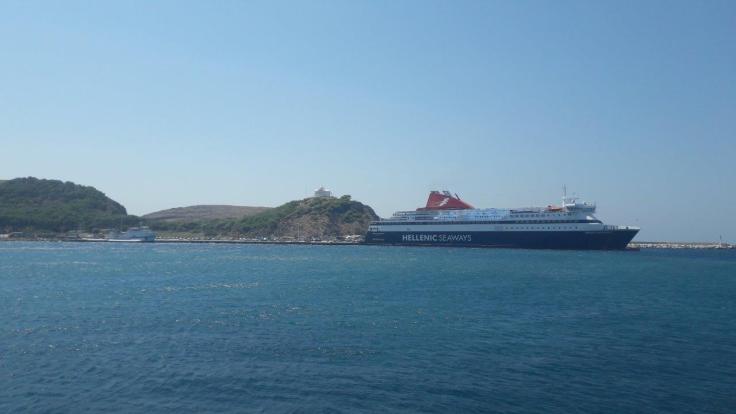 From the port there is nice view to Limnos hotel and the fortress on the top of the hill. 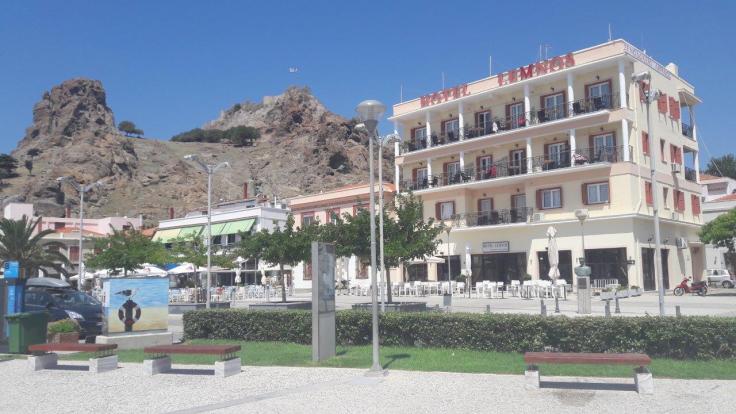 In Limnos we stay near Keros beach – the best spot for windsurfing. For the past two years, we are staying in a paid camping on a hill above Keros bay. Free camping in Greece is illegal and latterly the police is frequently hunting free campers. We stay in Keros Blue, a new camping nestled in an old Olive tree forest. We have a decent camping equipment which gives us all the necessary comfort.

I adore staying in this place – I feel like I am living in and 200 sq.m. flat – we have a three bedrooms tent, a huge living room with a dining table in the middle and a great sofa to lay on (which is a hammock). The only difference is that you don’t live in a block but you are out in the nature. And of course, you a have billion stars view – both in literal – the night sky is breathtaking and figurative sense – you have a great view to the bay. 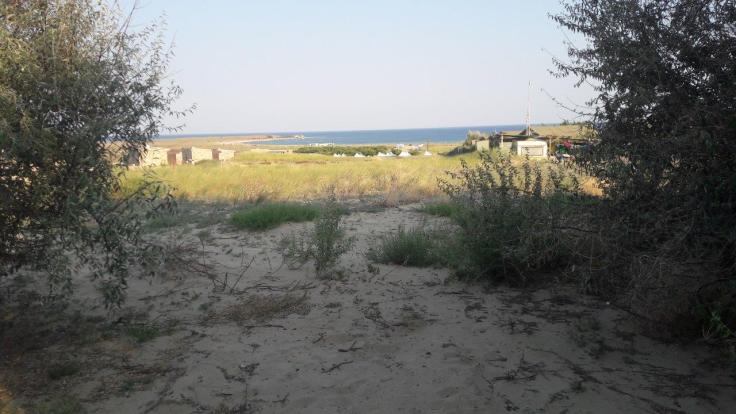 It is priceless. 😊 During dinner we often have guest like this, not so little, grasshopper who decided to spend some of his time with us. 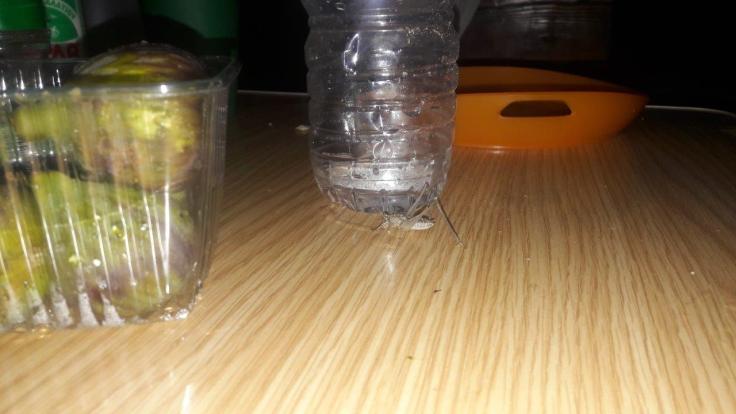 It is great to blend with the surrounding environment. And sleeping in the forest during summer is fantastic. It is one of the best sleep that I ever had.

In the camping there is newly opened restaurant where you can find a variety of local and international cuisine. There restaurant was a magnificent view to the bay.

Keros is a great place for wind and kite surfing. It is a huge bay with onshore wind and 3000 meters flat water surface – the perfect conditions for everyone – from beginners to advanced-pro riders.
It is so beautiful to see the shore full of different-colored kites and windsurf sails.

On the beach there are three windsurf schools. We always stay at the Siroko Wind Club.

The name of the clubs is coming from the word sirocco, which is a Mediterranean wind that comes from the Sahara and can reach hurricane speeds in North Africa and Southern Europe, especially during the summer season.

We love this place. The staff is great! They are really friendly and helpful and the windsurf and kitesurf instructors are amazing. On the beach there are sun umbrellas for everyone 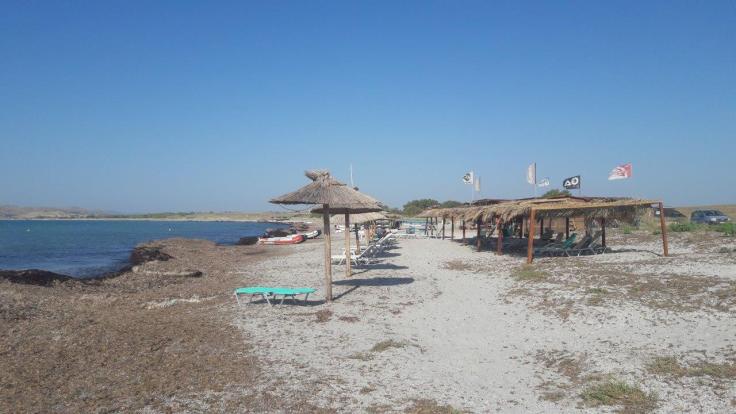 and the equipment in the station that you can rent is in perfect condition. 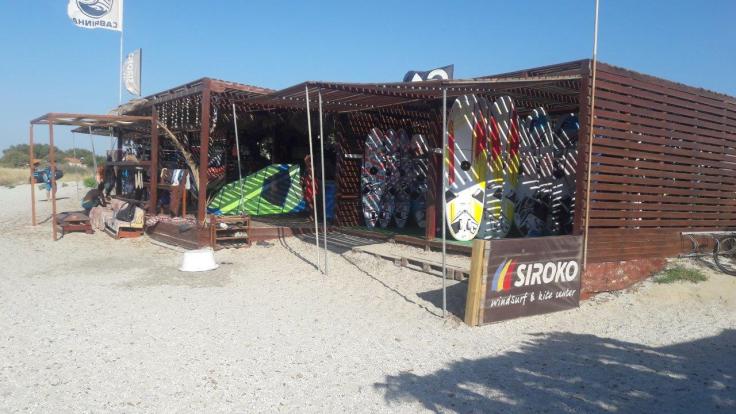 On the beach there is a bar where you can have a drink or a sandwich while sitting on the shadow and watching people riding.

For 10 days on the island we had a great time – we developed our windsurf abilities, we had some great rides and a perfect rest. The greatest thing is that our daughter is felling wonderful on the spot and she amused herself a lot. And after a long day of surfing it awesome to relax on the hammock under the shade of the olives trees in the camp. 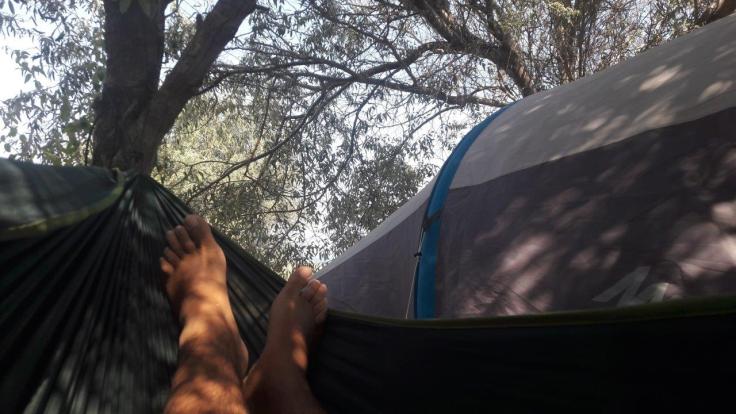 On the island there are plenty of fig trees. It is amazing to have a breakfast with freshly picked figs – it is so tasty and nutritious at the same time. And as no one is picking the figs we even take some for home 😊

I adore the food on the island (as all the Greek food). There are so many fresh fish that you can choose from and the Greeks are masters in the preparation of octopus. I adore the octopus in vinegar. 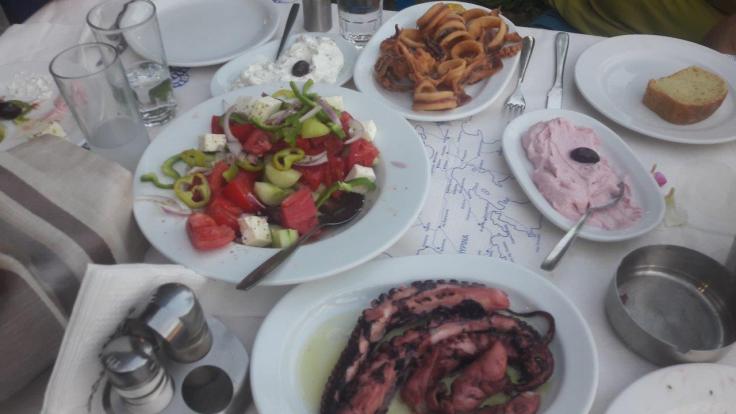 They prepare also delicious zucchini, mussels, bread and the list can go on… 😊 At the same time I am astonished by people who eat in a foreign country the things they eat at home – like ordering spaghetti Bolognese where you are in Greece!? I simply don’t understand it.

We were in Limnos on the 15th of August, which is one of the biggest religious celebrations in Greece. Dekapentavgoustos as the day is referred to in Greek, is the day of the Dormition of Virgin Mary. On the Greek Orthodox calendar this date marks the moment when Mary, Christ’s mother, ascended into Heaven and it is a national holiday. We decided to see how the Greeks celebrate this holiday, we know that they make honor a lot their religious holidays. We went to a nearby village and we were surprised to find out that there was no one on the street, all the houses were dark, and it was like 3 in the morning – nobody on the streets. At first, we thought that we were wrong, and the holiday was not on that day. Then we heard some music playing from a distance. Following the music, we arrived at the center of the village – a little square that was overcrowded. People have taken out plastic chairs from their home, put the in rows on the square and were enjoying the holiday. Two men, one with a bouzouki and another with a guitar were playing music and singing while a group of young girls were dancing traditional dances.

On the front row there were the priest and the mayor of the town sitting. Women were serving Greek bread and cookies to everyone on the square. It was a typical Greek feast and we enjoyed it a lot 😊

Leaving Limnos make us always sad, but we leave this place with the confidence that we will be back sooner as it has a special part in our hearts.

These long-distance ferries that are coming from the Southern islands of Greece are always crowded and you can see people sleeping everywhere.

As we were arriving in Kavala late in the evening, we had the chance to watch the sunset – it was beautiful. 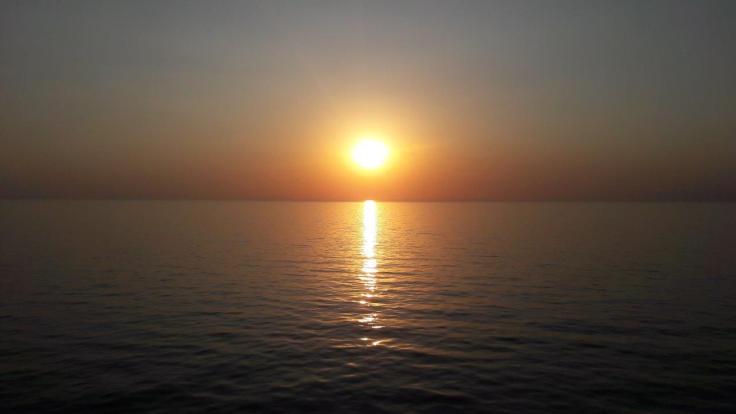 When we were approaching Kavala a pod of dolphins was swimming near the ferry for a long period of time. They were jumping, playing, like there were welcoming us in the gulf of Kavala – it was so touchable.