At the end of our trip in Iceland, we spent a day in Reykjavik. Reykjavik may be one of the smallest capital cities in Europe, but it still packs a powerful punch. Visitors can enjoy a lively culture and a multitude of events and festivals all years round.

According to the Book of Icelanders, the settlement of Iceland began in the year 871 with the arrival of Indolfur Arnarson to Reykjavik. When he arrived, steam rising up from hot springs prompted the name Reykjavik or “Smokey Bay”. When Iceland became independent from the Danes in 1944, Reykjavik became the country’s capital. Growing steadily ever since, Reykjavik has become the modern capital you can see today. It is a little, cozy city with small, colorful houses.

It is interesting to notice that two thirds of Icelanders live in Reykjavik or the surrounding suburbs. At the beginning of the 20th century, only about 6000 people lived in Reykjavik. The 2016 census counts just over 120 000, which is an increase of 2000% over the course of a century.

We were in Reykjavik on the 17th of June ant it turned to be Iceland’s Independence Day. On that day, the people celebrate the independence of Iceland from Denmark. The holiday is celebrated with a festival in every town of Iceland. The program included family oriented entertainment with street theatre, a variety of wonderful activities and a parade that passes the whole city. 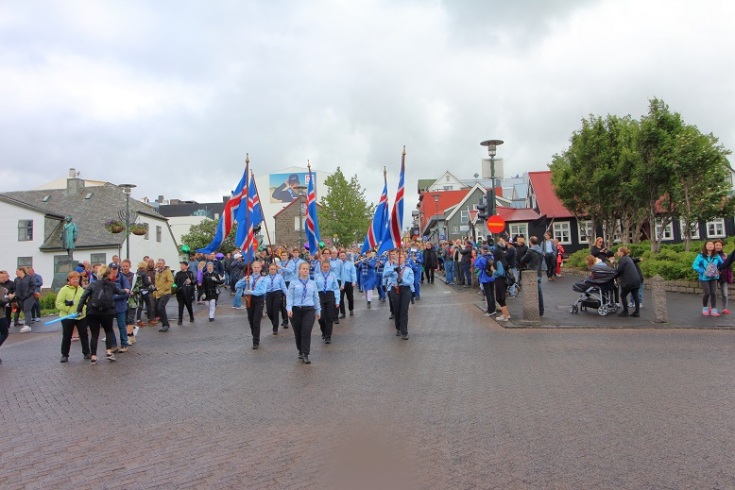 The city was full of events. In the Hljómskálagarður park there were animation for the children with a clown and different attractions, live music stage, playgrounds for children and even Iceland’s strongest man contest.

After spending some time celebrating Iceland’s independence, we went to Hallgrimskitkja. It is the majestic church is one of Reykjavik’s most iconic buildings and is visible from almost anywhere in the city. 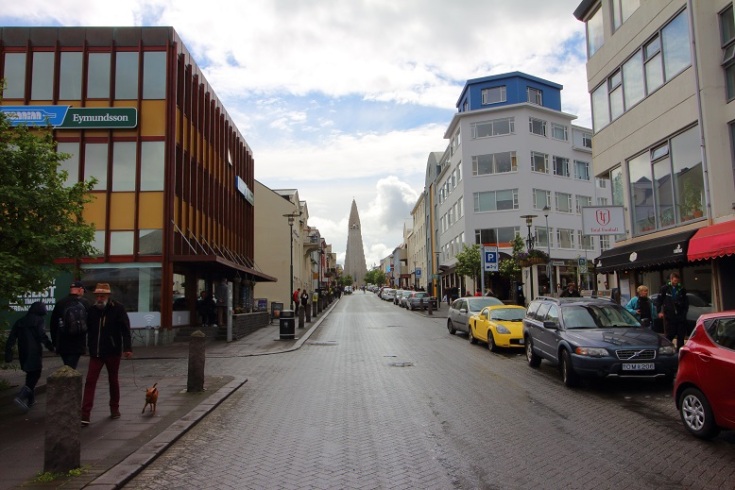 The tower of the church is among the city’s highest buildings and offers a fantastic view of the city. It is named after the Icelandic poet and clergyman Hallgrimur Petursson, author of the Passion Hymns. The architect, Gudjon Samuelsson, designed the church to resemble the basalt columns of Iceland’s landscape. 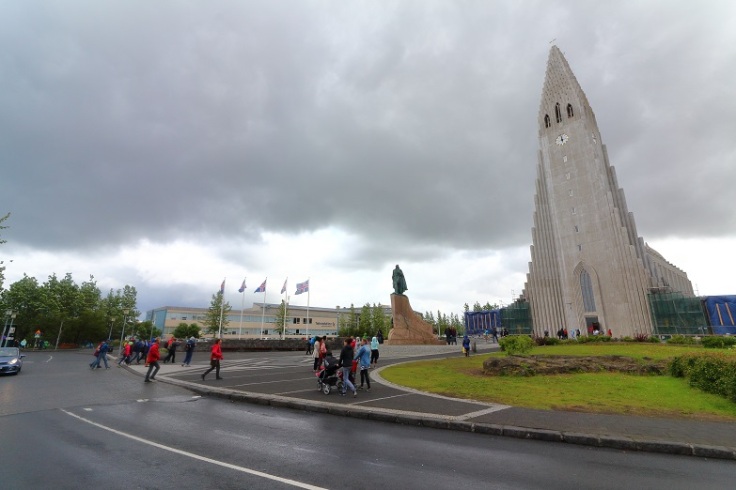 In front of the church you can see the statue of Ingolfur Arnarson. According to Iceland’s Book of Settlement, as the first permanent settlement, he threw his two wooden chieftain poles overboard, believing that wherever they washed was where he was fated to build his settlement. He is supposed to have ended up in Reykjavik. 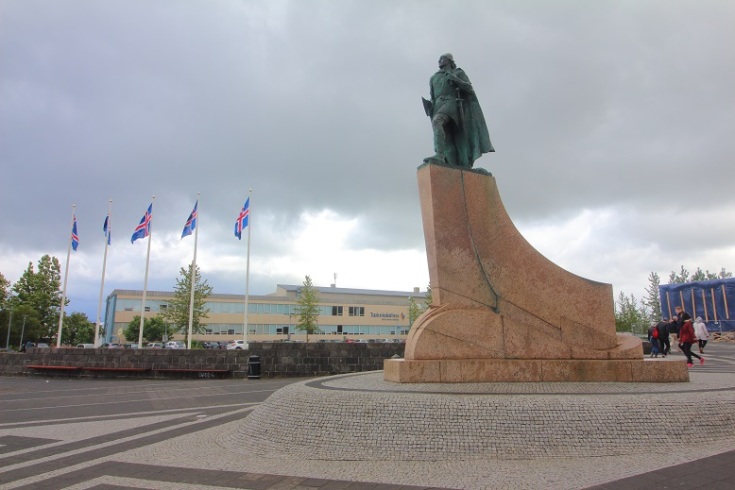 We also had a walk on Laugavegur, the city center’s main shopping street. It started out as a muddy trail for washerwomen carrying heavy loads of laundry to the hot spring in Laugardalur. At present, it is a nice walking street, with old houses and shops of different brands.

One of the best things about Reykjavik is its abundance of exceptional coffee houses, staffed with talented baristas. On a hot sunny day, the thriving coffee culture often spills out onto the streets. There were some adorable coffee houses that make you stay and relax for an unlimited time, even if you don’t drink coffee.

As we got a little hungry, we took a Fish and Chips from The Iceland Fish and Chips Wagon. I am not really into fast food fish, but this one was amazing. It was so fresh, and so tasty, that I would recommend it to anybody who is visiting Reykjavik. 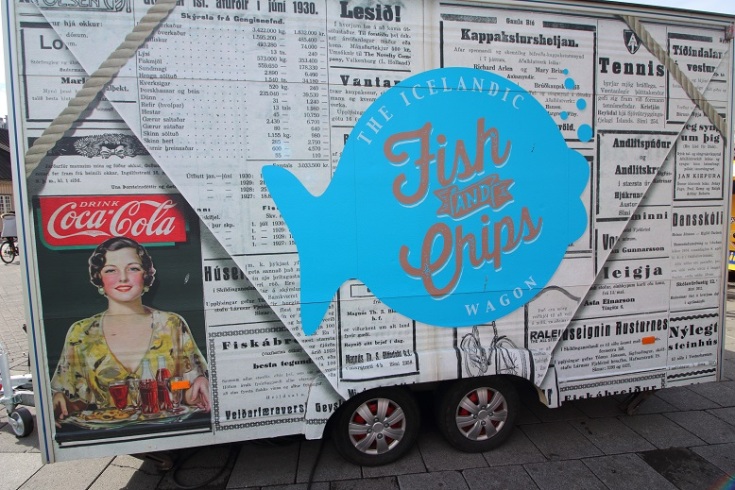 While Reykjavik’s small population ensures that it maintains its small-town charm, it’s still a modern European capital too, with the added bonus of a unique spa and pool culture.

We went toward the port to see the Reykjavik Opera house, Harpa. Harpa is Iceland’s biggest concert hall, suitable for a broad range of concerts and cultural events. Looking out over the Reykjavik harbor and glorious Mt. Esjan on the other side, Harpa also hosts promotions, plays, and public events. The attention-grabbing honeycomb façade was designed by Olafur Eliasson, a Danish artist of Icelandic descent.

Harpa is the winner of the 2013 European Union Prize for Contemporary Architecture – Mies van der Rohe Award, the European Commission and the Mies van der Rohe Foundation. With the announcement that “Harpa’s crystalline structure was inspired by Icelandic landscapes and traditions. Its dramatic design captures and reflects the light of the city, ocean and sky to thrilling effect.”

Near the Opera house is situated The Sun Voyager – a beautiful sculpture in the image of a Viking ship. The sculpture, by Jon Gunnar Arnason, symbolizes the Viking past of the Icelanders and an ode to the sun. It serves as a reminder of the history and heritage when the first Viking settlers came sailing to Iceland. On the sculpture you can read the following massage from the author: “We all have our fantasy boats, vessels that we dream of sailing away in, into dream. In my ships I unite my own fantasy, precision and the knowledge that boat builders have developed throughout the ages. The sun ship gives us a promise of a primeval land.” 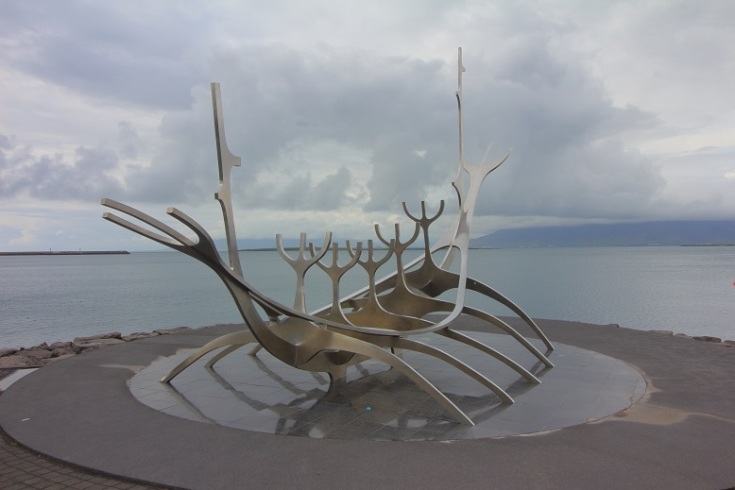 With its fascinating history, rooted in the Icelandic Sagas, and a unique location, surrounded by stunning natural beauty, Reykjavik manages to combine the hip and the wholesome, without the stress that usually follows a cosmopolitan metropolis.

Whether illuminated by the unending daylight in summertime or the spectacular Aurora Borealis at winter, Reykjavik is a great alternative travel destination for all seasons, offering a myriad of adventures and a paradise of possibilities for all visitors.

If you plan to visit Reykjavik it is important to know that in the City Hall there is tourist information office where you can find all the information that you need to organize your stay. The staff is very friendly and helpful, they have several computers and they can show you a lot of things.

Near Reykjavik is situated the Blue Lagoon one of Iceland’s most famous attractions.

The milky blue waters of the Blue Lagoon and the luxurious spa is one of the most recognized landmarks in Iceland. With an average water temperature of 38°C (100F) the lagoon contains 9 million liters of seawater and it renews itself every 40 hours.

The place looks really good, it has a nice coffee and restaurant inside and it costs around 60 euro per person. For me it is a must-see destination, but if you are travelling around the country, I am not sure if it is worth the price to visit as there are other similar places in Iceland. 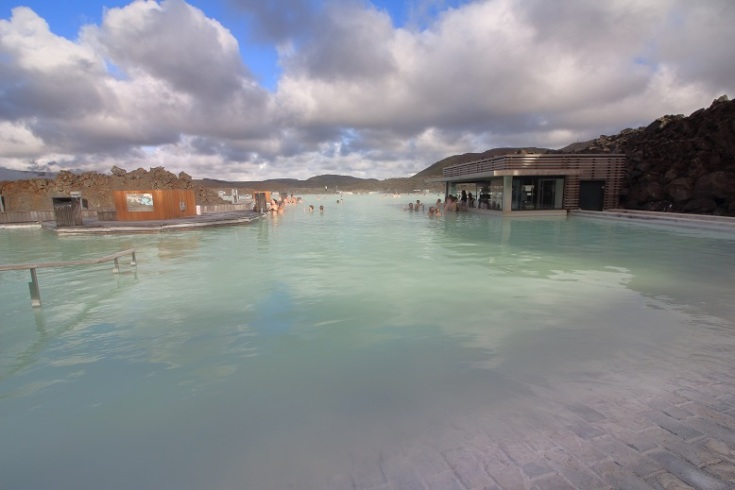 To sum up, Reykjavik is a nice small, vivid town that is worth visiting. But if you go to Iceland and stay only in Reykjavik you have no idea what Iceland looks like – you will never feel the Earth’s power and its dynamic that you can feel in every corner of this amazing island.

If you want to see more from Iceland you can do it with my e-book “Iceland – The land of a hundred faces” full of stories and more than 200 high quality photos.